Philippe Mora's 'Howling II: Your Sister is a Werewolf' Dated for Blu-ray

The horror sequel is bound for Blu-ray in July.

In an early announcement to retailers, Scream Factory will be releasing 'Howling II: Your Sister is a Werewolf' on Blu-ray on July 14.

After newscaster Karen White's shocking on-screen transformation and violent death (in the original THE HOWLING), her brother Ben (Reb Brown, Yor, the Hunter of the Future) is approached by Stefan Crosscoe (Christopher Lee), a mysterious man who claims that Karen has, in fact, become a werewolf. But this is the least of their worries... to save mankind, Stefan and Ben must travel to Transylvania to battle and destroy Stirba (Sybil Danning), the immortal queen of all werewolves, before she is restored to her full powers!

You can find the latest specs for 'Howling II: Your Sister is a Werewolf' linked from our Blu-ray Release Schedule, where it is indexed under July 14. 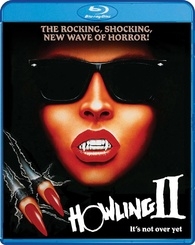