Paul Nicholas' 'The Naked Cage' Blu-ray Up for Pre-Order

The 1986 action drama also known as 'Wild Cage' is coming to high-definition in May.

In an early announcement to retailers, Scream Factory is working on 'The Naked Cage' for Blu-ray on May 2.

From the director of Chained Heat comes a new tale of survival behind bars!

Michelle (Shari Shattuck, Arena) is young and pretty… and in prison for someone else's crime. Soon, the naive newcomer is making enemies in all the wrong places. Diane, a kinky warden, wants to maneuver Michelle into her plush private "pleasure room." The sadistic guard wants to pay her a visit in solitary confinement. And a ruthless, psychotic fellow inmate just wants to see her dead. As a full-blown cell block riot explodes around her, Michelle plunges into a desperate, deadly confrontation with the treacherous foe that can prove her innocence – or destroy her life!

Specs have not been detailed yet, but supplements will include Original Theatrical Trailer.

You can find the latest specs for 'The Naked Cage' linked from our Blu-ray Release Schedule, where it is indexed under May 2. 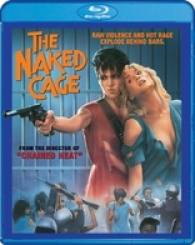 Discs mentioned in this article: (Click for specs and reviews)
The Naked Cage (Blu-ray)