Emmett Alston's 1980 slasher is headed for Blu-ray next month.

As previously reported, Scream Factory will be releasing 'New Year's Evil' on Blu-ray on February 24.

Diane "Blaze" Sullivan, the host of a nationally televised punk-rock show on New Year's Eve, is receiving calls from a mysterious killer who tells her of his plans to off someone at midnight in each of America's major time zones… and she will be the last.

Starring Roz Kelly (who played Pinky Tuscadero on Happy Days), Kip Niven (Magnum Force), Grant Cramer (Killer Klowns From Outer Space), Louisa Moritz (Death Race 2000), Taaffe O'Connell (Galaxy Of Terror) and Teri Copley (We Got It Made), New Year's Evil injects an "intimate and refreshing viewpoint into what was once a tired old scenario" (Andre Dumas, The Horror Digest)…and then takes you on a non-stop thrill ride of unmitigated terror!

You can find the latest specs for 'New Year's Evil' linked from our Blu-ray Release Schedule, where it is indexed under February 24. 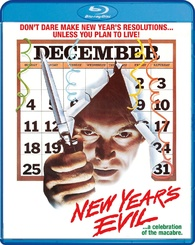