The diabolical double feature is headed for Blu-ray next month.

In an early announcement to retailers, Scream Factory will be releasing 'Murders in the Rue Morgue / The Dunwich Horror' on Blu-ray on March 29.

Your first frightening film is 1971’s Murders in the Rue Morgue. In early 20th-century Paris, a theatrical company with a specialty in Grand Guignol undertakes their most gruesome production yet. But when a madman with an axe to grind arrives on the scene, the stage is set for real mayhem and murder most foul. Will the backstage bloodshed be quelled – or is it curtains for the cast? Jason Robards and Herbert Lom star in this marvelously macabre mystery.

From the City of Lights (and frights), our tour of terror moves on to a small New England town in 1970’s The Dunwich Horror. When a beautiful student named Nancy catches the eye of the weird Wilbur Whateley, her professor, the good doctor and occult expert Dr. Henry Armitage, knows that no good will come of it. But as Armitage digs deeper into the Whateley family history, he uncovers a buried secret – and a plot intended to call forth an evil beyond imagination. A cult favorite that proves that The Old Ones are good ones, The Dunwich Horror stars Dean Stockwell, Ed Begley, and Sandra Dee.

You can find the latest specs for 'Murders in the Rue Morgue / The Dunwich Horror' linked from our Blu-ray Release Schedule, where it is indexed under March 29. 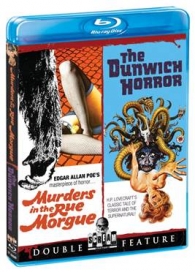