The 2015 horror flick arrives on Blu-ray next month.

In an early announcement to retailers, Scream Factory will be releasing 'Dementia' on Blu-ray on May 17.

In 'Dementia', George (Gene Jones, The Hateful Eight and The Sacrament) is an aging ex-soldier haunted by memories of Vietnam and struggling to reconnect with his estranged son and granddaughter. But when he suffers a stroke and is diagnosed with dementia, George is left in the care of Michelle (Halloween's Kristina Klebe), a seemingly sweet nurse with a disturbing dark side. At the mercy of a psychopath with a hypodermic needle, George becomes a prisoner in his own home, caught in a sadistic game of cat and mouse as brutal as anything he experienced in Vietnam. In his feature debut, director Mike Testin masterfully keeps the tension mounting — until it explodes in delirious violence.

You can find the latest specs for 'Dementia' linked from our Blu-ray Release Schedule, where it is indexed under May 17. 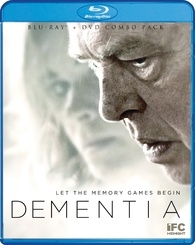