The 1990 horror flick starring Anthony Perkins will check in to Blu-ray this August.

In an early announcement to retailers, Scream Factory says 'Psycho IV: The Beginning' will arrive on Blu-ray on August 23.

A seemingly rehabilitated Norman Bates is drawn to a late night radio show where the host encourages him to share his views on the topic of matricide - the murder of a mother by her own child. Reliving his childhood, Norman recounts his trials as a young boy living with his widowed schizophrenic mother. These haunting memories are more than just disturbing visions of the past; they threaten to rekindle his killing urge in this spine-tingling thriller.

Specs and supplements haven't been revealed yet, but the suggested list price for the Blu-ray is $27.99.

You can find the latest specs for 'Psycho IV: The Beginning' linked from our Blu-ray Release Schedule, where it is indexed under August 23. 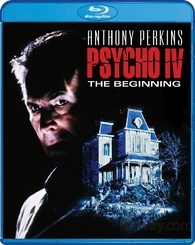