The 2016 slasher film is headed for Blu-ray this Halloween season.

In an early announcement to retailers, Shout Factory will be bringing 'Fender Bender' to Blu-ray on October 4.

He stalks the streets. Remorseless. Brutal. Bloodthirsty. When his prey is at its most vulnerable, he appears. And when night falls and all is quiet… he strikes. Prepare for the next driving force in horror… Fender Bender, "a scary, suspenseful slasher [that'll] keeps you on pins and needles throughout" (Bloodydisgusting.com)!

Seventeen-year-old Hilary has just received her driver's license… only to have her first accident shortly thereafter. Innocently exchanging her personal information with the remorseful stranger behind the wheel, Hilary returns home for a quiet evening with friends. But when the man she so readily handed all of her information to reveals himself to be something much darker and sinister than she could imagine, Hilary finds herself in a head-on collision with terror.

From writer/director Mark Pavia (Stephen King's The Night Flier), Fender Bender is an intense crash-and-slash thriller that brings you back to a time when the boxes on the shelf at your local video store beckoned you with masked, knife-wielding maniacs and a twisted sense of morals.

The Blu-ray will include the High-Definition Theatrical Cut (2.35:1) as well as a "Retro VHS" Version Of The Film in which you can watch the film in a re-created mode that takes you back to the 1980's and the heyday of VCRs; and supplements include: "Slashback" Trailer Reel – A collection of vintage Scream Factory-branded slasher previews (Runs about 40 mins. PERFECT to have in the background during Halloween parties.); Director's and Producer's Commentaries; Behind-The-Scenes Featurette; and Original Trailer and TV Spot.

You can find the latest specs for 'Fender Bender' linked from our Blu-ray Release Schedule, where it is indexed under October 4. 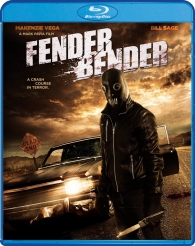