George Miller's classic action-thriller is getting a Collector's Edition in May.

As previously reported, Scream Factory is planning to release 'Mad Max: Collector's Edition' on Blu-ray on May 5.

In the ravaged near-future, a savage motorcycle gang rules the road. Terrorizing innocent civilians while tearing up the streets, the ruthless gang laughs in the face of a police force hell-bent on stopping them. But they underestimate one officer: Max (Gibson). And when the bikers brutalize Max's best friend and family, they send him into a mad frenzy that leaves him with only one thing left in the world to live for – revenge! Also starring Joanne Samuel, Hugh Keays-Byrne (Mad Max: Fury Road) and Steve Bisley (The Great Gatsby, Red Hill), this rugged racecar of a film runs on "comic book volatility… exhilarating rowdiness and visual intensity" (The New York Times)!

You can find the latest specs for 'Mad Max: Collector's Edition' linked from our Blu-ray Release Schedule, where it's indexed under May 5. 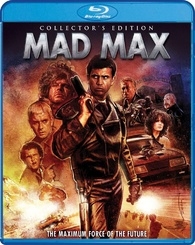