The 1972 thriller starring Patty Duke is headed for Blu-ray in May.

As previously reported, Scream Factory says 'You'll Like My Mother' will arrive on Blu-ray, and now the date has been set for May 10.

Francesa Kinsolving, a very pregnant widow whose husband was rescently killed in action in Vietnam, travels to visit her late husband's mother in a snowy Minnesota town only to get snowed in during a fierce blizzard where she's forced to wait it out only to slowly uncover some terrible dark secrets that Mrs. Kinsolving has been hiding, one of them is her psychotic other son, a recent escapee from a lunatic asylum, who is shacked up in the basement of the house.

Specs have yet to be revealed, but supplements include: NEW Interviews with actors Richard Thomas And Sian Barbara Allen; Photo Gallery; and Original Theatrical Trailer.

You can find the latest specs for 'You'll Like My Mother' linked from our Blu-ray Release Schedule, where it is indexed under May 10. 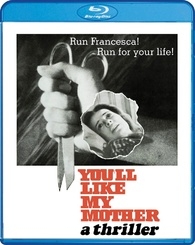