The 1988 horror flick will be getting the Blu-ray treatment in September.

In an early announcement to retailers, Scream Factory is working on 'Lady in White' for Blu-ray on September 27.

On Halloween, 1962, ten year old Frankie Scarletti's classmates lock him in the coffin-like confines of his fourth grade cloakroom where he is forced to spend the night unbeknownst to anyone....alive. When the darkness comes, Frankie is horrified to discover the ghost of a little girl murdered in the very same room ten years earlier. How he comes to solve the mystery of who killed her and bring her to final peace, makes for a terrifying and heartwarming journey into the realm of human experience.

You can find the latest specs for 'Lady in White' linked from our Blu-ray Release Schedule, where it is indexed under September 27. 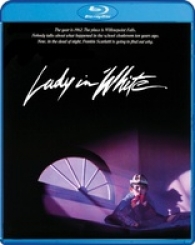