The bizarre action-thriller starring Asami targeting Blu-ray in May has now been fully detailed.

As previously reported, Scream Factory says 'Gun Woman' will arrive on Blu-ray on May 26.

A brilliant doctor vows revenge on a crazy sadistic killer following the murder of his wife… and devises the perfect assassination plan by turning a young woman into the most lethal assassin the world has ever seen. This outrageous plan will unfold in the killer's heavily fortified underground lair. The lethal assassin will be placed into a temporal state of death and sent into the facility as a dead body… but when she wakes, it is everyone else in the compound who will be deprived of their lives.

But there is one catch. What will she use as a weapon? The staff of the underground facility is armed with weapons that have fingerprint authentication systems so it's impossible for her to use their weapons. The doctor's genius plan is to surgically hide the gun parts into the woman's body, so she can rip off her stitches when she wakes, take out the parts, assemble the gun and become the ultimate Gun Woman.

You can find the latest specs for 'Gun Woman' linked from our Blu-ray Release Schedule, where it is indexed under May 26. 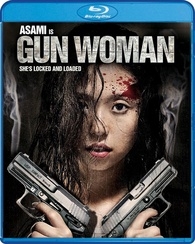