The 1984 science fiction film is getting a new Blu-ray edition in December.

As previously reported, Scream Factory is working on 'Dreamscape: Collector's Edition' for Blu-ray on December 13.

Close Your Eyes And The Adventure Begins. Alex Gardner (Dennis Quaid) is a man with an incredible psychic gift… but for years has used it solely for personal gain. Reuniting with his old mentor, Dr. Novotny (Max von Sydow), Gardner joins a government project in which he learns to channel his abilities in order to enter peoples' subconscious through their dreams. As his powers grow, the young psychic soon finds himself in a living nightmare of conspiracy and murder… and the only way out is to go back in. A sleeper hit on its initial release, Dreamscape's reputation as a classic of '80s genre entertainment has only grown over the years. From its impressive cast – including Christopher Plummer, Kate Capshaw, Eddie Albert, David Patrick Kelly, and George Wendt – to behind-the-camera talent such as director Joseph Ruben (The Stepfather) and co-writer Chuck Russell (A Nightmare On Elm Street 3: Dream Warriors, 1988's The Blob), Dreamscape is a rousing mix of science fiction, adventure, and horror beyond your wildest imagination.

Exact specs have not been detailed yet, but the Blu-ray will have a new 2K transfer and supplements will include:

You can find the latest specs for 'Dreamscape: Collector's Edition' linked from our Blu-ray Release Schedule, where it's indexed under December 13. 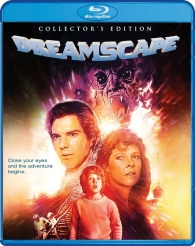