In an early announcement to retailers, Scream Factory has revealed that they are working on 'Ghost Story' for Blu-ray on November 24.

In a peaceful New England town, the four lifelong friends who make up the Chowder Society come together each week to regale each other with tales of terror. But when one of the elderly gentlemen experiences a family tragedy, it becomes apparent that a buried secret from their youth has arisen to remind them of the sins of their past. Soon, they will learn they have never been forgiven… and a supernatural vengeance awaits them all. Craig Wasson, Patricia Neal, and Alice Krige also star in this chilling and atmospheric telling of one of horror’s greatest stories.

You can find the latest specs for 'Ghost Story' linked from our Blu-ray Release Schedule, where it is indexed under November 24. 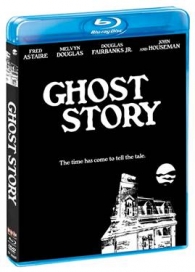