The 1995 horror flick starring Christopher Reeve and Kirstie Alley will possess Blu-ray in 2016.

As previously reported, Scream Factory will be releasing 'Village of the Damned: Collector's Edition' on Blu-ray later this year, and now the date has been set for April 12.

An American village is visited by some unknown life form which leaves the women of the village pregnant. Nine months later, the babies are born, and they all look normal, but it doesn't take the "parents" long to realise that the kids are not human or humane.

From the master of suspense, John Carpenter, comes a chilling new version of the sci-fi classic. Something is terribly wrong in the tiny village of Midwich. After an unseen force invades a quiet coastal town, ten women mysteriously find themselves pregnant. Local physician Dr. Alan Chaffee (Christopher Reeve) and government scientist Dr. Susan Verner (Kirstie Alley) join forces when the women simultaneously give birth... and the reign of supernatural terror begins. In what The New York Times calls "one scarifying trip," the people of Midwich must try to find a way to stop the unstoppable in the Village of the Damned.

You can find the latest specs for 'Village of the Damned: Collector's Edition' linked from our Blu-ray Release Schedule, where it is indexed under April 12. 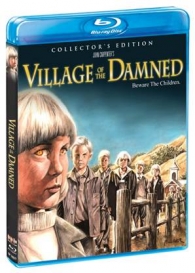