The Collector's Edition will be available on Blu-ray this December.

Scream Factory is set to release Starman: Collector's Edition on Blu-ray on December 4.

When his spacecraft is shot down over Wisconsin, Starman (Jeff Bridges) arrives at the remote cabin of a distraught young widow, Jenny Hayden (Karen Allen), and clones the form of her dead husband. The alien convinces Jenny to drive him to Arizona, explaining that if he isn't picked up by his mothership in three days, he'll die. Hot on their trail are government agents, intent on capturing the alien, dead or alive. En route, Starman demonstrates the power of universal love, while Jenny rediscovers her human feelings for passion.

The release will feature a lossless 5.1 soundtrack and supplements include:

You can find the latest specs for Starman: Collector's Edition linked from our Blu-ray Release Schedule, where it is indexed under December 4. 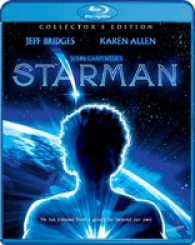