Snake Plissken will be back on Blu-ray sporting a brand new transfer in April. It's up for pre-order right now!

In a world ravaged by crime, the entire island of Manhattan has been converted into a prison which houses the world's most brutal inmates. And when the President of the United States (Donald Pleasence) crash lands inside, only one man can bring him back: Snake Plissken (Russell), a notorious outlaw and former Special Forces war hero who, in exchange for a full pardon, descends into the decayed city and wages a blistering war against the captors. But time is short: in 24 hours, an explosive charge planted inside Snake's body will end the mission - and his life - unless he succeeds!

The release will feature a brand new HD transfer struck from a new 2K scan of an original interpositive and supplements will include: Specs have yet to be revealed, but supplements will include: NEW 2K High Definition scan of the inter-positive, struck from the original negative; NEW Audio Commentary with actress Adrienne Barbeau and directory of photography Dean Cundey; Audio Commentary with director John Carpenter and actor Kurt Russell; Audio Commentary by producer Debra Hill and production designer Joe Alves; NEW Big Challenges in Little Manhattan: The Visual Effects of Escape From New York; NEW Scoring the Escape: A Discussion with composer Alan Howarth; NEW On Set with John Carpenter: The Images of Escape From New York with photographer Kim Gottlieb-Walker; NEW I Am Taylor – an interview with actor Joe Unger; NEW My Night on the Set – an interview with filmmaker David DeCoteau; Deleted Scene: The Original Opening Bank Robbery Sequence; Return to Escape from New York Featurette; Theatrical Trailers; and Photo Galleries – Behind-the-Scenes, Posters and Lobby Cards.

You can find the latest specs for 'Escape from New York: Collector's Edition' linked from our Blu-ray Release Schedule, where it's indexed under April 21. 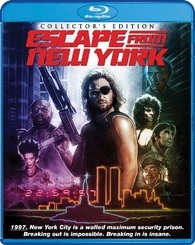