The 1999 action-thriller starring Jamie Lee Curtis, William Baldwin, and Donald Sutherland is bound for high-definition in May.

As previously reported, Scream Factory is preparing 'Virus' on Blu-ray on May 2.

Jamie Lee Curtis (Halloween, True Lies) faces a new, unstoppable terror in this science fiction chiller from the producer of Aliens, Terminator 2 and Tremors. Curtis plays the navigator of a tugboat crew which loses its cargo during a hurricane. In the calm eye of the storm, they come across a Russian research ship floating dead on the water. Boarding the vessel, they initially believe it to be deserted - but they soon realize they're not alone. First, they discover a terrified survivor (Joanna Pacula, Tombstone), and then they find that the ship has been taken over by a ruthless alien intelligence. Now, the small band must fight for their lives against a force that has come to claim Earth for its own, and creates bio-mechanical monstrosities with one goal: eliminating the virus called humans. Donald Sutherland (Invasion of the Body Snatchers) and William Baldwin (Backdraft) also star in a film featuring horrific special effects by the artist behind the Jurassic Park films, Species and Starship Troopers.

You can find the latest specs for 'Virus' linked from our Blu-ray Release Schedule, where it is indexed under May 2. 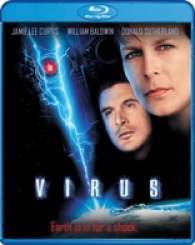