Rowdy Herrington's 1988 crime thriller is planned for Blu-ray in January.

In an early announcement to retailers, Scream Factory says 'Jack's Back' will hit Blu-ray on January 26.

One hundred years ago, Jack the Ripper slashed his way through London's red light district. Now, a modern-day maniac is honoring the event by mutilating L.A.'s ladies of the evening. Has Jack the Ripper been reborn? The police are stumped and the prostitutes of L.A. are scared. The only person with a chance of solving the murders has a problem of his own – he's the LAPD's number one suspect....

You can find the latest specs for 'Jack's Back' linked from our Blu-ray Release Schedule, where it is indexed under January 26. 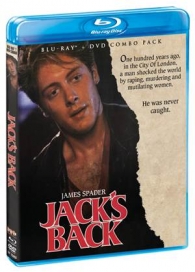