In an early announcement to retailers, Scream Factory will be releasing 'Gravy' on Blu-ray on October 6.

An irreverent, daring and wickedly-fun horror comedy, Gravy walks a perfect line of tension and release, laughs and scares. It's Halloween night. A trio of costumed misfits with very special dietary requirements seizes a Mexican cantina and force the staff to engage in a late night of gluttony. The only caveat is what's on the menu…and who will survive til morning!

You can find the latest specs for 'Gravy' linked from our Blu-ray Release Schedule, where it is indexed under October 6. 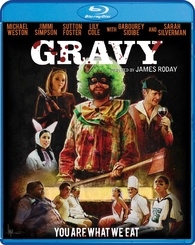