Bonus features have been revealed for the 1978 horror flick getting a collector's edition Blu-ray in August.

As previously reported, Scream Factory will be releasing 'Invasion of the Body Snatchers: Collector's Edition' on Blu-ray on August 2.

One by one, the residents of San Francisco are becoming drone-like shadows of their former selves. As the phenomenon spreads, two Department of Health workers, Matthew (Sutherland) and Elizabeth (Adams), uncover the horrifying truth: Mysterious pods are cloning humans — and destroying the originals! The unworldly invasion grows stronger with each passing minute, hurling Matthew and Elizabeth into a desperate race to save not only their own lives, but the future of the entire human race.

You can find the latest specs for 'Invasion of the Body Snatchers: Collector's Edition' linked from our Blu-ray Release Schedule, where it's indexed under August 2. 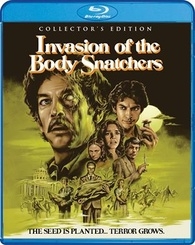