Ash will return to Blu-ray just in time for Halloween.

As previously reported, Scream Factory is working on 'Army of Darkness: Collector's Edition' for Blu-ray, and now the date is set for October 27.

Forced to lead a makeshift Dark Ages army against the demonic Deadites, who possess all the deadly magic of hell, the shotgun-toting, chainsaw-armed, reluctant 20th century time traveler Ash must save the living from the dead, rescue his medieval girlfriend and get back to his own time.

You can find the latest specs for 'Army of Darkness: Collector's Edition' linked from our Blu-ray Release Schedule, where it is indexed under October 27. 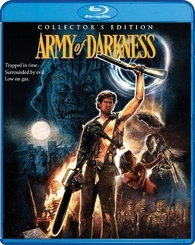