The horror double feature arrives on Blu-ray in April.

As previously reported, Scream Factory will be releasing 'Ghoulies/Ghoulies II' on Blu-ray on April 21.

Ghoulies II The demonic, toilet-dwelling goblins are back! Stowed away in "Satan's Den," the traveling House of Horror operated by carnival workers Larry and Uncle Ned, the Ghoulies merrily devour the sideshow attraction's patrons...until Larry realizes his horror house is for real and tries to flee the scene! Deliciously outrageous special effects and over-the-top antics ratchet up the horrific fun!

You can find the latest specs for 'Ghoulies/Ghoulies II' linked from our Blu-ray Release Schedule, where it is indexed under April 21. 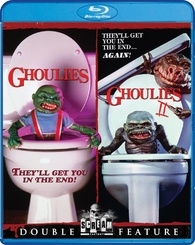