'From a Whisper to a Scream' Blu-ray Supplements Detailed

The 1987 horror film directed by Jeff Burr arrives on Blu-ray in April.

In an early announcement to retailers, Scream Factory will be releasing 'From a Whisper to a Scream' on Blu-ray on April 28.

After losing his eyesight, his wife, and his daughter at the hands of a deranged psychopath, a man is transformed into an unstoppable killing machine hellbent on revenge! Eight years after the massacre of his family, the "Blind Wolf" has returned as a highly trained swordsman ready to seek justice. But he doesn't know seven deadly (and even undead) assassins have been hired by his sworn enemy to make sure he doesn't leave town alive!

Specs have yet to be revealed, but supplements will include: Return to Oldfield: The Making of WHISPER TO A SCREAM - - A comprehensive feature-length documentary about the making of 'From A Whisper To A Scream', featuring director Jeff Burr, producer Darin Scott, co-screenwriter C. Courtney Joyner, star Clu Gulager, and many more; A Decade Under the Innocence: Adventures in Super 8 Filmmaking - A feature-length documentary about teenage adventures in 'Super 8' filmmaking during the 1970's in Georgia, featuring director Jeff Burr and more; Audio Commentary with writer/director Jeff Burr; Audio Commentary with writer/producer Darin Scott and writer C. Courtney Joyner; Still Gallery with commentary by writer/director Jeff Burr; Theatrical Trailer; and "THE OFFSPRING" TV Spots.

You can find the latest specs for 'From a Whisper to a Scream' linked from our Blu-ray Release Schedule, where it is indexed under April 28. 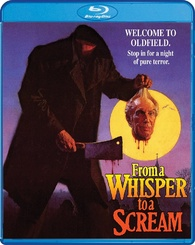