The horror flick starring Jason Patric and Louisa Krause is planned for Blu-ray in June.

In an early announcement to retailers, Scream Factory will be releasing 'The Abandoned' on Blu-ray on June 7.

Take a terrifying plunge into the warped mind of a disturbed young woman. Desperate to get her life back on track, the unstable Streak (Louisa Krause – Martha Marcy May Marlene) takes a job as a security guard, working the graveyard shift at a once upscale, now abandoned apartment complex. But on her first night on duty, she discovers a horrifying presence lurking deep within the bowels of the decaying building. With her nerves already on edge, Streak must confront demons both real and imagined as she struggles to keep a grip on her sanity. Jason Patric (The Losers, Narc) co-stars in this harrowing thrill ride.

You can find the latest specs for 'The Abandoned' linked from our Blu-ray Release Schedule, where it is indexed under June 7. 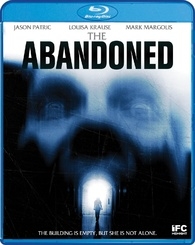