The Italian-made exploitation classic arrives on Blu-ray for the first time in March.

In an early announcement to retailers, Scream Factory will be releasing 'Exterminators of the Year 3000' on Blu-ray on March 3.

In a post-apocalyptic future where the earth is a desert and water is the most precious substance of all, a band of survivors must turn to a mysterious stranger to battle a ruthless gang of motorcycle psychos for control of the wasteland and the water. A glorious crash of guns, nuclear fallout, and synthesizers make this a must-see for anyone who’s been longing for the day in which they can finally get beyond Thunderdome.

You can find the latest specs for 'Exterminators of the Year 3000' linked from our Blu-ray Release Schedule, where it is indexed under March 3. 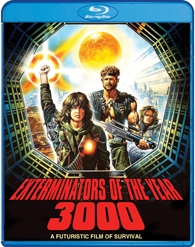