In an early announcement to retailers, Scream Factory is preparing to bring 'The Dead Room' on Blu-ray on September 6.

Step inside the Dead Room, where something sinister guards a home's horrifying secrets. Inspired by a 1970s urban legend, this atmospheric nerve-shredder follows two scientists and a young psychic as they travel to the countryside to investigate mysterious occurrences at a remote farmhouse. Skepticism quickly turns to terror as the researchers' presence unsettles a seriously angry demonic presence possessing the home. Upping the white-knuckle suspense with visceral camerawork and unsettling sound design, The Dead Room creates a sense of palpable danger lurking in every corner and hallway.

You can find the latest specs for 'The Dead Room' linked from our Blu-ray Release Schedule, where it is indexed under September 6. 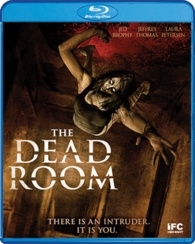