The 1989 horror thriller will unmask Blu-ray in February.

In an early announcement to retailers, Scream Factory will be releasing 'The Phantom of the Opera' on Blu-ray on February 17.

An aspiring opera singer finds herself transported back to Victoria-era London - and into the arms of a reclusive, disfigured maestro determined to make her a star. The silver-throated Christine (Jill Schoulen) enjoys success through the arrangements of her new lover (Robert Englund)...until she realizes that he has been committing unspeakably grisly murders in her honor and won't stop until he's completed his masterpiece...in blood!

You can find the latest specs for 'The Phantom of the Opera' linked from our Blu-ray Release Schedule, where it is indexed under February 17. 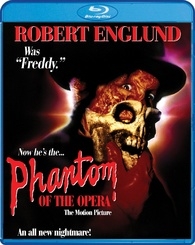