The 1987 thriller starring David Keith will stalk Blu-ray in November.

As previously reported, Scream Factory says that they will release 'White of the Eye' on Blu-ray on November 17.

If you're a wealthy, attractive woman, stay out of Arizona, because you are fair game. A twisted killer is on the loose and he tortures and dissects his beautiful victims as part of a primitive Indian ritual. All the clues lead to one man who is clearly innocent. But nothing is as simple as black and white in White Of The Eye.  David Keith (An Officer And A Gentleman, Firestarter, Daredevil) and Cathy Moriarty (Raging Bull, Casper) star in this shocking mystery-thriller co-written and directed by Donald Cammell (Demon Seed and co-director of Performance). The film also features an eclectic score by Nick Mason (Pink Floyd) and Rick Fenn (10cc).

You can find the latest specs for 'White of the Eye' linked from our Blu-ray Release Schedule, where it is indexed under November 17. 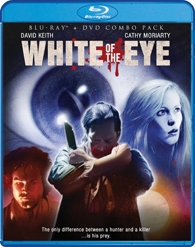 Discs mentioned in this article: (Click for specs and reviews)
White of the Eye (Blu-ray)