Stuart Gordon's 1987 cult classic will be getting the Blu-ray treatment in November. Pre-order the Blu-ray here.

In an early announcement to retailers, Scream Factory says 'Dolls: Collector's Edition' on Blu-ray on November 11.

You can find the latest specs for 'Dolls: Collector's Edition' linked from our Blu-ray Release Schedule, where it is indexed under November 11. 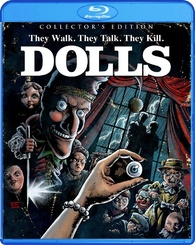