The horror flick is heading to Blu-ray in February.

In an early announcement to retailers, Scream Factory is preparing 'Deadtime Stories' for Blu-ray on February 28.

Your favorite nightmares come to life in a horror/fantasy salute to the age-old bedtime story ritual. Travel on a mysterious journey to a medieval world populated by blood-crazed witches, evil experiments and captive maidens. Then from the catacombs and dark caverns of medieval Europe you plunge into modern suburbia and the frolicsome adventures of a nubile lady jogger tracked by a savage werewolf. Finally, sensuality becomes macabre black comedy on the trail of three escaped mental patients who share a country house with a daffy murderess.

You can find the latest specs for 'Deadtime Stories' linked from our Blu-ray Release Schedule, where it's indexed under February 28. 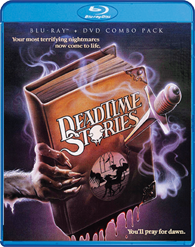 Discs mentioned in this article: (Click for specs and reviews)
Deadtime Stories (Blu-ray)