In an early announcement to retailers, Scream Factory will be releasing 'Disturbing Behavior' on Blu-ray on March 22.

In the halls of Cradle Bay High School, something sinister is happening… something dark… something disturbing. Sure, the “Blue Ribbons” – the clique that’s at the top of the food chain at Cradle Bay – appear perfect in every way. But underneath their clean-cut, well-mannered facades lurks a shocking secret – one that a group of Cradle Bay High’s outsiders and rebels must uncover in order to save their school, their town…and their own lives.

Specs have yet to be revealed, but supplements include: Director's Commentary with David Nutter; Deleted Scenes; Alternate Ending; and Theatrical Trailer.

You can find the latest specs for 'Disturbing Behavior' linked from our Blu-ray Release Schedule, where it is indexed under March 22. 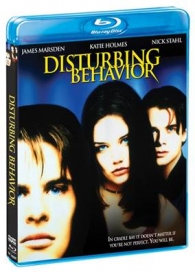