'Candyman,' 'Screamers,' 'Single White Female,' and 11 Others Bound for Blu-ray from Scream Factory

Scream Factory is set to release 'Candyman: Collector's Edition' on Blu-ray on November 20.

This gut-wrenching thriller follows a graduate student whose research summons the spirit of the dead! When Helen Lyle hears about Candyman, a slave spirit with a hook hand who is said to haunt a notorious housing project, she thinks she has a new twist for her thesis. Braving the gang-ridden territory to visit the site, Helen arrogantly assumes Candyman can't really exist ... until he appears, igniting a string of terrifying, grisly slayings. But the police don't believe in monsters, and charge Helen with the crimes. And the only one who can set her free is Candyman.

NEW 2K Restoration From A New 4K Scan Of The Original Negative, Supervised And Approved By Writer/Director Bernard Rose And Director Of Photography Anthony B. Richmond

NEW "Be My Victim" – An Interview With Tony Todd

NEW "It Was Always You, Helen" – An Interview With Virginia Madsen

NEW "Urban Legend: Unwrapping Candyman" – A Critical Analysis Of The Film With Writers Tananarive Due And Steven Barnes

"Sweets To The Sweet: The Candyman Mythos" Featuring Interviews With Clive Barker, Virginia Madsen And More ...

There will also be a Deluxe Version limited to 2000 copies that includes a slipcover and poster. 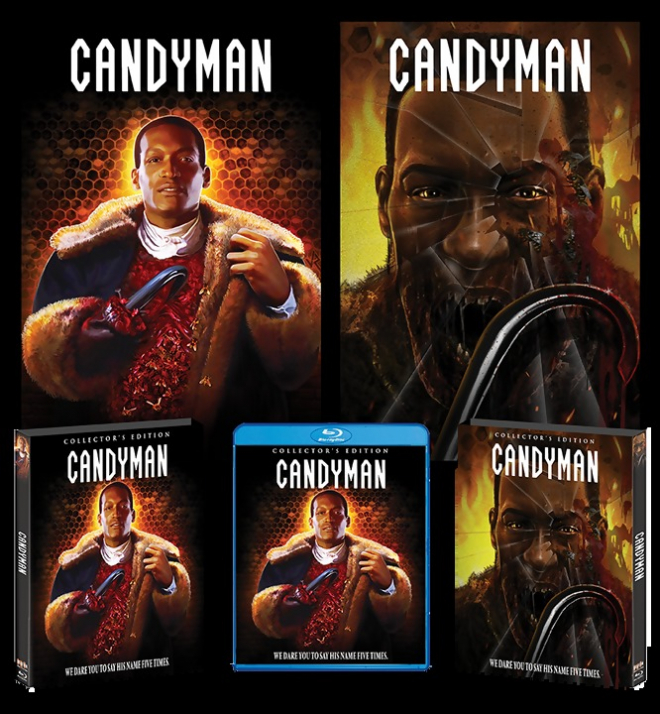 Charles Bronson is "a hero all the way" (Variety) as a rogue cop pursuing a deranged killer in this action-packed suspense thriller. Serving up vigilante justice as only he can. Bronson delivers one of his most riveting performances in this "exceedingly well-made" (Gene Siskel) film.

Bronson plays Leo Kessler, a cynical Los Angeles cop on the trail of Warren Stacey (Gene Davis), a homicidal maniac who turns rejection from beautiful women into the ultimate revenge. When the legal system sets Stacey free, Kessler plants evidence to put him behind bars for good. But Kessler's plan backfires leaving him with only one option: to hunt down Stacey on his own...before the crazed killer strikes again!

The release will feature a BRAND NEW REMASTER of the film as well as NEWLY PRODUCED bonus features.

Sarah has always been different. So as the newcomer at St. Benedict's Academy, she immediately falls in with the high school outsiders. But these girls won't settle for being a group of powerless misfits. They have discovered The Craft and they are going to use it.

The terrifying and tiny menaces are out in full force with this four-film collection packed with enough Special Features to make any fan's mouth water! In Critters, the terrified Brown family are trapped in a deadly nightmare and must fight for their lives against a litter of extraterrestrial, bloodthirsty monsters. But it's a losing battle until two intergalactic bounty hunters arrive, determined to blow the creatures off the planet! In Critters 2: The Main Course, some eggs have survived and are popping open, bringing another horde of the little creatures! Brad Brown (Scott Grimes) returns to fight them along with three bounty hunters. Critters 3 stars Leonardo DiCaprio as Josh, a beleaguered Angelino who must lead the fight against the little monsters as they invade an L.A. apartment building. In the final film, Critters 4, a super strain of genetically engineered monsters are designed to take over the universe. This time, Brad Dourif and Angela Bassett must battle the little bloodthirsty hairballs.

A young party traveling to the Carpathian Mountains receives a strange warning from Father Sandor, the Abbot of Kleinberg, telling them not to proceed with their plans. Despite his advice, the Kents continue but are prematurely abandoned in a forest by their coachman, who refuses to continue after dark. Finally, their luck is changing it seems, when another mysterious black coach appears and delivers them to an enormous, eerie castle where they are offered the hospitality of Count Dracula...

This intriguing mystery/thriller by Brian DePalma (Mission: Impossible, Carrie) will leave you breathless. A tenth wedding anniversary celebration ends tragically when Michael Courtland (Cliff Robertson) discovers that his wife (Genevieve Bujold) and 9-year-old daughter have been kidnapped. When an attempt to thwart the captors goes awry, Courtland's wife and daughter are never recovered. Several years later while vacationing in Florence, Courtland falls in love with a young woman who is an exact double of his dead wife. On the eve of their wedding, the woman disappears and Courtland finds a ransom note - a duplicate of the one found several years earlier.

What's in store for a family that disregards a warning in a will and decides to accept their inheritance of a cursed house in Eerie, Pennsylvania? The answer is plenty, as John and Mary discover in this suspenseful comedy spoof. A "Book of Evil" has been hidden in the house and when it's opened, it unleashes all the evil in the world. The family is warned that on "Friday the 13th it gets bad, but on Saturday the 14th it gets worse!". It's all outrageous fun as John and Mary and their children attempt to exterminate their troubles before their housewarming party just two days away on Saturday the 14th!

The perfect roommate ... or a perfect nightmare? An innocent want ad – "SWF seeks female to share apt in West 70s; Non-smkr, professional preferred" – opens the door to murderous, psychotic terror in this pulse-pounding shocker starring Bridget Fonda (Jackie Brown) and Jennifer Jason Leigh (The Hateful Eight). After an unfaithful fiancé leaves her suddenly single, Allison Jones (Fonda) advertises for a roommate to share her spacious apartment. But when the introverted Hedra (Leigh) moves in, she doesn't just take over Allie's spare bedroom. She takes over her clothes, her boyfriend ... and her identity. An unrelenting thriller from director Barbet Schroeder (Barfly, Reversal Of Fortune), Single White Female boasts terrific performances and stylish suspense to die for. Bring this Blu-ray into your home today (at your own risk).

In Silent Night, Deadly Night Part 2, Billy's younger brother Ricky (Eric Freeman) follows in the family tradition of Christmas carnage. Psycho Santa is back...to deck the halls with chunks of bodies! Both these gorehound holiday favorites have been restored from original vault materials, chock full of gratuitous nudity and grisly violence, then stuffed with jolly new extras for the absolute ultimate in Season's Bleedings!

Stephen King's Sleepwalkers is a classic horror story that takes a perfect Norman Rockwell town ... and turns it inside out.

Brian Krause and Alice Krige star in this terrifying tale of modern-day vampires who move from small town to small town to prey on virtuous young women. Imperceptibly inhuman to everyone except for felines, these vicious shape-shifters have their eyes on a new victim: Mädchen Amick is Tanya, the sexually curious virgin who falls for Charles, the new boy in school (Krause). Mutating at will from golden boy to savage monster, Charles stalks Tanya to feed his seductive mother. As the tension mounts (and the casualties pile up), the town's tabbies gather for a final, chilling showdown with the monsters in their midst – and we all know it's not nice to hurt people's felines.

When his spacecraft is shot down over Wisconsin, Starman (Bridges) arrives at the remote cabin of a distraught young widow, Jenny Hayden (Karen Allen), and clones the form of her dead husband. The alien convinces Jenny to drive him to Arizona, explaining that if he isn't picked up by his mothership in three days, he'll die. Hot on their trail are government agents, intent on capturing the alien, dead or alive. En route, Starman demonstrates the power of universal love, while Jenny rediscovers her human feelings for passion.

The year is 2078. The man is rebel Alliance Commander Col. Joseph Hendrickson (Peter Weller), assigned to protect the Sirius 6B outpost from ravage and plunder at the hands of the New Economic Bloc. His state-of-the-art weaponry are known as Screamers; manmade killing devices programmed to eliminate all enemy life forms. Screamers travel underground; their intent to kill announced by piercing shrieks. They dissect their victims with sushi precision, then eradicate all traces of the carnage. They are lethal. Effective. Tidy. And somehow, they are mutating--self-replicating into human form - and slaughtering every beating heart on the planet.

When New England college student Natalie (Alicia Witt, TV's The Exorcist) finds herself at the center of a series of sadistic murders seemingly inspired by urban legends, she resolves to find the truth about her school's own legend: a twenty-five-year-old story of a student massacre at the hands of an abnormal Psych professor. As the fraternities prepare to celebrate the macabre anniversary, Natalie discovers that she is the focus of the crazed killer's intentions in the ultimate urban legend – the unfolding story of her own horrific murder.

The making of a horror movie takes on a terrifying reality for students at the most prestigious film school in the country in Urban Legends: Final Cut, the suspenseful follow-up to the smash hit Urban Legend.

At Alpine University, someone is determined to win the best film award at any cost - even if it means eliminating the competition. No one is safe and everyone is a suspect. Urban Legends: Final Cut is an edge-of-your-seat thriller that will keep you guessing until the shocking climax. Starring Jennifer Morrison (Amityville: The Awakening), Matthew Davis (Below), Joseph Lawrence (Rest Stop), Eva Mendes (Ghost Rider), Anthony Anderson (Scream 4), Hart Bochner (Die Hard) and Loretta Devine (Urban Legend).

You can find the latest specs for all of these titles linked from our Blu-ray Release Schedule.