'Candyman: Farewell to the Flesh' Dated for Blu-ray

In an early announcement to retailers, Scream Factory will be releasing 'Candyman: Farewell to the Flesh' on Blu-ray on January 6.

The Candyman (Todd) arrives in New Orleans and sets his sights on a young woman whose family was ruined by the immortal killer years before.

You can find the latest specs for 'Candyman: Farewell to the Flesh' linked from our Blu-ray Release Schedule, where it is indexed under January 6. 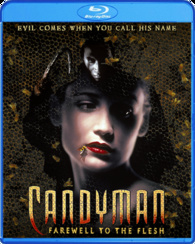