The 2001 horror flick will be getting the Blu-ray treatment this August.

In an early announcement to retailers, Scream Factory will be releasing 'Session 9' on Blu-ray on August 16.

It looms up out of the woods like a dormant beast. Grand, imposing... abandoned and deteriorating, the Danvers State Mental Hospital, closed down for 15 years is about to receive 5 new visitors. Donning protective gear, the men of the Hazmat Elimination Co. venture into the eerily vast and vacant asylum that is filled with an evil and mysterious past. Rampant patient abuse, medieval medical procedure and rumors of demonic possession are some of the many dark secrets the hospital holds - but then so do each of the men.

Specs and supplements haven't been revealed yet, but the suggested list price for the Blu-ray is $27.99.

You can find the latest specs for 'Session 9' linked from our Blu-ray Release Schedule, where it is indexed under August 16. 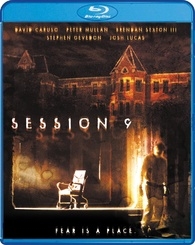