The 1974 slasher film will be available in a Collector's Edition this holiday season.

The college town of Bedford is receiving an unwelcome guest this Christmas. As the residents of sorority house Pi Kappa Sigma prepare for the festive season, a stranger begins to stalk the house. A series of obscene phone calls start to plague the residents of the sorority and it becomes clear that a psychopath is homing in on the sisters with dubious intentions. And though the police try to trace the calls, they discover that nothing is as it seems during this Black Christmas. "Stuffed with extremely tense moments, chilling cinematography, amazing characters and long-lasting dread… [this] genuine classic is completely deserving of every bit of respect and admiration it's picked up over the last 40 years" (addictedtohorormovie.com).

You can find the latest specs for 'Black Christmas: Collector's Edition' linked from our Blu-ray Release Schedule, where it's indexed under December 13. 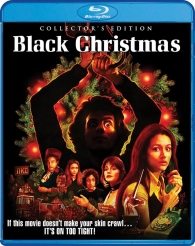