Blu-ray Leads 'The Pack' in July

The 2016 horror flick will hunt Blu-ray this summer.

In an early announcement to retailers, Scream Factory says 'The Pack' will hit Blu-ray on July 5.

In The Pack, man’s best friend becomes his worst nightmare when a horde of bloodthirsty wild dogs descends upon a family’s farmhouse. In a remote stretch of the Australian Outback, a sheep rancher (Jack Campbell), his veterinarian wife (Anna Lise Phillips), and their two teenage children live in bucolic isolation — until a horrifying night when a pack of fang-baring, four-legged, rabid beasts besiege their home. With no one around to help them, the family must band together to survive — or else become canine kibble. Generating a steadily mounting sense of dread, The Pack cleverly toys with genre conventions before it goes in for the kill.

Specs have yet to be revealed, but the Blu-ray will include a featurette and trailer.

You can find the latest specs for 'The Pack' linked from our Blu-ray Release Schedule, where it is indexed under July 5. 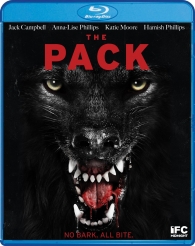