The 2000 space adventure arrives on Blu-ray in January.

As previously reported, Scream Factory will be releasing 'Supernova' on Blu-ray on January 13.

Supernova is a science fiction thriller that chronicles the high-stakes adventures of a deep space hospital ship and its six member crew. When their vessel, the Nightingale 229, answers an emergency distress signal from a distant galaxy, the crew soon finds itself in danger from the mysterious young man they rescue, the alien artifact he smuggled aboard and the gravitational pull of a giant star about to go supernova -- the most massive explosion in the universe.

Specs have yet to be revealed, but supplements include: The Making of Supernova featuring new interviews with actors Lou Diamond Phillips and Robert Forster, producer Daniel Chuba and filmmaker Jack Sholder; Deleted Scenes; Alternate Ending; and Theatrical Trailer.

You can find the latest specs for 'Supernova' linked from our Blu-ray Release Schedule, where it's indexed under January 13. 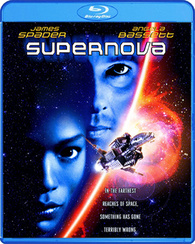