Blu-ray will have to bear another trip to Canada this September.

In an early announcement to retailers, Scream Factory says Backcountry' will be available on Blu-ray on September 1.

A tense thriller about a young couple who go camping in the Canadian wilderness. Alex (Jeff Roop, Jekyll + Hyde) is a seasoned camper, but Jenn (Missy Peregrym, Rookie Blue) is not. But when they realize that they have entered bear territory, the terror gets turned up to a whole new level.

You can find the latest specs for 'Backcountry' linked from our Blu-ray Release Schedule, where it is indexed under September 1. 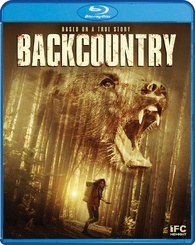