The musical comedy will arrive on Blu-ray in June.

As previously reported, Scorpion Releasing is preparing 'Movie.  Movie' for Blu-ray, and now the date has been set for June 28.

Newly re-mastered in HD! A hilarious two-films-in-one toast to the classic B movies of Hollywood in its heyday when the double features were king. Dynamite Hands (in black and white, of course) is the fight story about big punch boxer Joey Popchick (Harry Hamlin, Clash Of The Titans), his trainer Gloves Malloy (George C. Scott, Patton) and the up-to-no-good Vince Marlow (Eli Wallach, The Good The Bad And The Ugly). Baxters Beauties of 1933 (in gorgeous living color, naturally) follows the fortunes of Broadway producer Spats Baxter (George C. Scott) with a heart of gold and a daughter who thinks she s an orphan and ends up saving the day in Spats best show ever. Featuring an all-star cast including Barry Bostwick (The Rocky Horror Picture Show), Art Carney (Harry & Tonto), Red Buttons (Sayonara), Kathleen Beller (The Betsy), Barbara Harris (Family Plot), Anne Reinking (All That Jazz) and Trish Van Devere (The Hearse) and directed by the great Stanley Donen (Singin In The Rain, Charade).

Specs have not been detailed yet, but supplements will include: NEW interviews with Harry Hamlin, Kathleen Beller and Barry Bostwick; and an Introduction by George Burns.

You can find the latest specs for 'Movie Movie' linked from our Blu-ray Release Schedule, where it's indexed under June 28. 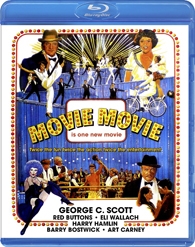