'Planet of the Vampires' Dated for Blu-ray

Mario Bava's cult classic is planned for Blu-ray in October. Pre-order it here.

In an early announcement to retailers, Scorpion Releasing will be releasing 'Planet of the Vampires' on Blu-ray on October 28.

Mario Bava, (Hatchet for the Honeymoon, The Whip and the Body), master of the Italian suspense film, tries his hand at science fiction with this stylishly mod twist on the vampire legend. Two spacecrafts on the same mission land on a strange, misty planet. The crew members each find themselves overcome by a hostile alien force which causes homicidal impulses in each of them. As the astronauts are killed one by one, the dead won't stay dead, which complicates things greatly for the remaining living crew who are attempting to unravel the mystery of the strange forces at hand. Great set design, pleasingly garish colors, and a genuine sense of dread have made this film a cult favorite.

Specs have yet to be finalized, but supplements will include: Audio Commentary by Tim Lucas, author of Mario Bava: All the Colors of the Dark; Short Story by Renato Pestriniero; Trailers From Hell with Joe Dante; Trailers From Hell with Josh Olson; Highlight from the alternate music score; Still Gallery from Alan Upchurch collection; Original Italian Opening credit; and Original Theatrical Trailer.

You can find the latest specs for 'Planet of the Vampires' linked from our Blu-ray Release Schedule, where it's indexed under October 28. 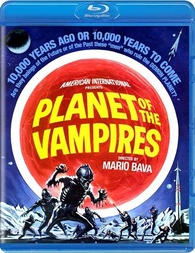