The bonus features for the 1977 classic adventure planned for Blu-ray later this year have now been detailed.

As previously reported, Scorpion Releasing is preparing 'The People That Time Forgot' for Blu-ray, and the date has been set for May 24.

When an expedition in search of a lost colleague traces his last steps in the frozen Arctic, the team discovers a hidden tropical oasis in the middle of the ice! As things quickly thaw out, clothes come off and long forgotten cavemen - and dinosaurs - come a-hunting for fresh meat. Soon, prehistoric hysteria sets in and it's every man - and scantily clad woman - for himself.

You can find the latest specs for 'The People That Time Forgot' linked from our Blu-ray Release Schedule, where it's indexed under May 24. 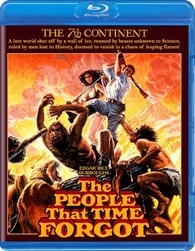