The company is prepping mass production for its 146-inch MicroLED display.

According to a report from The Korea Herald, Samsung is gearing up to begin production for its giant MicroLED screen dubbed "The Wall." Though pricing has still not been confirmed, mass production is expected to commence in September.

Samsung's The Wall is a next-gen 146-inch 4K display. Using a modular MicroLED design based on the tech used in the company's commercial Cinema Screens, the display features self-emitting picture technology with micrometer (µm) scale LEDs that do not require a backlight or color filters. As a result, the screen is capable of achieving incredible contrast, deep black levels, high color volume, and close-to-perfect viewing angles. In addition, the screen's modular, bezel-free construction allows users to make the TV larger (up to 146-inches) or smaller by adding or removing modules in any configuration with no impact on performance. Likewise, customers can also reconfigure the modules to match whatever aspect ratio they desire. 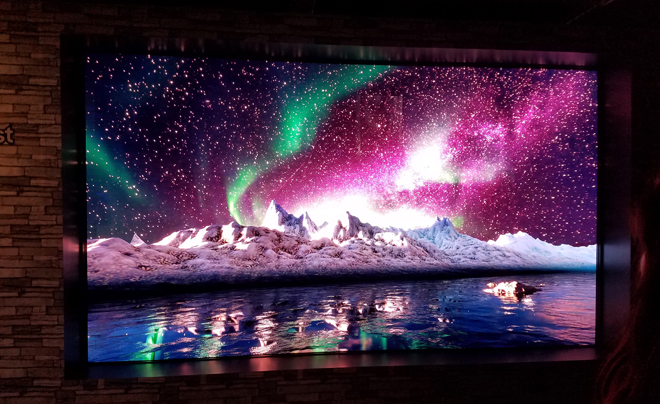 The Wall measures 80mm thick and is initially being geared toward the luxury market and businesses like hotels, shops, stadiums, museums, and convention centers. A thinner, more household friendly version is also being developed. This model is slated to launch in 2019 and is expected to measure 30mm thick or less.

Samsung has not announced a price point for The Wall just yet, but Han Jong-hee, Samsung's Head of Visual Display Business, has stated that the MSRP won't be as high as some have predicted. Likewise, costs are expected to go down once production increases and the 30mm model launches.

While a full verdict on the screen will have to wait until the final version is released, we got to demo The Wall display at CES 2018 and a Samsung Launch Event earlier this year, and came away very impressed. Based on our initial impressions, MicroLED tech is poised to merge the deep blacks and wide viewing angles found on OLED panels with the higher brightness and reduced risk of burn-in associated with LCD tech, offering a next-gen 4K HDR display that seemingly combines the best of both worlds.