We've compiled the latest gear news, including the launch of FreeSync support for Samsung TVs, the upcoming release of ASUS' new HDR monitor, and more.

Samsung has released a new firmware update (ver 1103.4) enabling AMD FreeSync technology on select 4K displays. The update is available now for the NU8000 LED TV and the entire 2018 lineup of QLED TVs, including the Q6, Q7, Q8 and Q9.

With AMD FreeSync tech, supported displays can now sync their refresh rates to a game's frame rate in order to help minimize screen tearing. The mode can be toggled on through the Game Mode Settings menu and is compatible with PCs that use AMD graphics cards, Xbox One S game consoles, and Xbox One X game consoles. Once selected, users can choose "Ultimate" for a range of 48-120Hz or "Basic" for 90-120Hz gaming. With that said, there are some resolution limitations tied to the feature. According to Digital Trends, Samsung TVs with FreeSync enabled are capable of supporting 1920 x 1080 gaming at 120Hz, 2560 x 1440p gaming at 120Hz, and 3840 x 2160 gaming at 60Hz. Samsung also cautions that users may experience issues with panel brightness when using FreeSync.

Samsung's 2018 QLED lineup with FreeSync tech is led by the flagship Q9FN. The display features some of the industry's top color volume and HDR brightness specs powered by full array local dimming and quantum dot technology. HDR10, HLG, and the new dynamic HDR10+ format are all supported as well. Smart TV functions with Bixby Voice control and a new Ambient Mode round out the premium package.

The 27-inch IPS monitor features a 4K UHD resolution of 3840 x 2160, along with Quantum Dot tech for 97% coverage of the DCI-P3 color gamut and 99% coverage of the Adobe RGB color gamut. DisplayHDR 1000 certification is included as well for optimal high dynamic range capabilities, along with full array local dimming powered by 384 zones. In addition, the display includes NVIDIA G-SYNC HDR tech which allows the screen to synchronize its refresh rate to the game being played, enabling a highly responsive, smooth, tear-free experience.

Here's a full rundown of key specs per ASUS

The ROG Swift PG27UQ will carry an MSRP of $2,000 and Newegg currently lists a release date of June 22. And in addition to the 27-inch model, ASUS is also expected to release its first Big Format Gaming Display, or BFGD for short, this summer. The upcoming 65-inch monitor also offers 4K HDR support with NVIDIA G-SYNC technology, along with NVIDIA SHIELD media player capabilities. BFGD models are set to be available from Acer and HP as well.

LG has announced the first installation of commercial-grade OLED TVs designed specifically for hotel rooms. The displays are now featured in various suites and clubs at the Marriott Marquis Chicago at McCormick Place.

"LG OLED hotel TVs are revolutionizing the hospitality industry by offering the very best picture quality available today, promising a lasting impression on today's most discerning business and leisure travelers. Commercial LG OLED technologies empowers hoteliers to reach and engage guests throughout the hotel, from luxury suites to public spaces, in ways never thought possible. This is truly the next generation of TV technology for hotel guests," Kosla said. 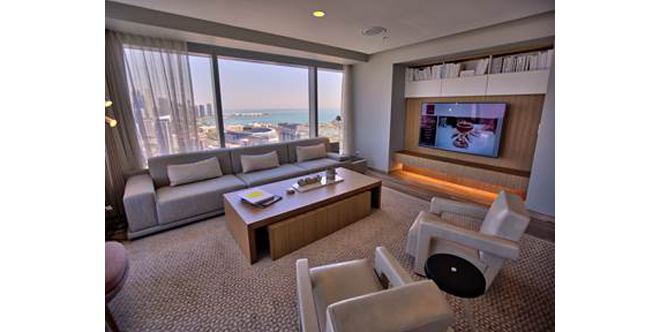