Roku has announced a new version of its popular streaming stick. The updated Roku Streaming Stick now has more processing power than any other pocket sized streaming player on the market.

"The Roku Streaming Stick is one of our most popular models. Consumers appreciate having access to the complete Roku streaming experience in a portable, low-­‐cost device," said Sharad Sundaresan, SVP product management for Roku. "The new Roku Streaming Stick takes our popular experience to the next level with a significant upgrade in power and performance, as well as features that are specifically designed to get people to the entertainment they want to watch quickly and easily whether they’re at home or on the go." 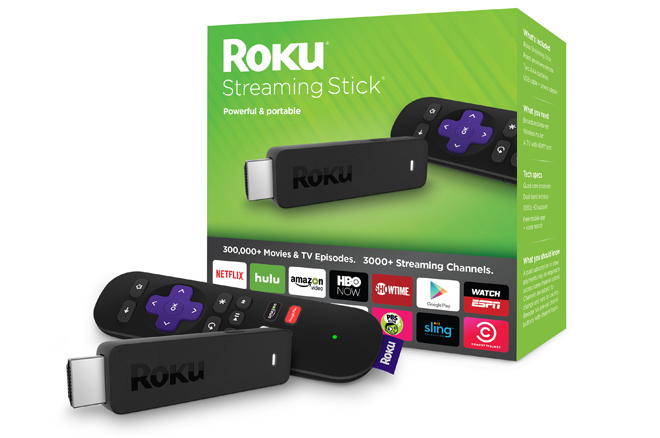 The new Roku Streaming Stick features a compact, sleek design that is smaller and 8x more powerful than the previous version. Under the hood, the device is run by a quad core processor, giving it more processing power than the competing Amazon Fire TV and Google Chromecast. In addition, the device runs the latest Roku OS 7.1, providing access to over 3,000 streaming channels, including 300,000 movies and TV episodes, along with a universal search option. Likewise, the updated operating system adds new categories within Roku Feed allowing customers to discover popular TV shows and movies in one place. The media dongle also offers a private listening option through wired or wireless headphones via a mobile phone or tablet when using the Roku Mobile App for iOS and Android devices.

Additional features include Dual-band MIMO wireless; a remote for easy navigation and control; video casting support from Netflix and YouTube mobile apps; remote control support from the Roku Mobile App for iOS and Android; and Hotel and Dorm Connect for easy connection to wireless networks away from home.

Roku's latest Streaming Stick is now available for pre-order for $50. The device is expected to hit stores later this month.