The Blu-ray of the acclaimed 1970 film is planned for a November release. You can pre-order here.

In an early announcement to retailers, RaroVideo will be releasing 'The Conformist' on Blu-ray on November 25.

Since its release in 1970, The Conformist has been hailed as an internationally important film and a triumph of film style. It was the breakthrough film for Bernardo Bertolucci, launching his decades-long career as one of the leading filmmakers in world cinema. Bertolucci's screenplay (adapted from the Alberto Moravia novel) was nominated for an Academy Award, and the film also helped to launch the career of renowned cinematographer Vittorio Storaro, who would go on to collaborate with Bertolucci on such classics as Last Tango in Paris, 1900, and The Last Emperor, as well Francis Ford Coppola's Apocalypse Now and Warren Beatty's Reds. The sumptuous art direction by Ferdinando Scarfiotti (Death in Venice, American Gigolo) creates a vivid depiction of the Italian Fascist period filled with Art Deco design and architecture. The film's atmosphere is further complemented by the beautiful score by acclaimed composer Georges Delerue (Hiroshima Mon Amour, Day for Night).

The story follows a secret police agent, Marcelo Clerici (Jean-Louis Trintignant) who is dispatched to assassinate his old professor, Quadri (Enzo Tarascio). Clerici uses his honeymoon with his new wife Giulia (Stefania Sandrelli) as the perfect cover under which to carry out his assignment. While on his mission, however, he becomes obsessed with the professor's wife Anna (Dominique Sanda), and slowly he begins to question everything he thought he believed about fascism.

The Conformist continues to be an influence to filmmakers the world over, and Raro Video's Blu-ray release will give new audiences a chance to discover this classic film for the first time, in a dazzling new restoration that does justice to Bertolucci's distinctive and incomparable visual style. It will also be a welcome addition to the home video collections of long-time fans of the film, who can now watch it in this new HD restoration that looks better than ever before, along with a wealth of supplemental materials that provide new insight and information into this influential masterpiece.

The Blu-ray will feature a new HD transfer from the original 35mm negative with PCM Stereo audio and supplements include: In the Shade of the Conformist (57 mins, 5 sec.); Original 1970 US Theatrical Trailer; 2014 US Theatrical Re-release Trailer; and Fully illustrated booklet.

You can find the latest specs for 'The Conformist' linked from our Blu-ray Release Schedule, where it is indexed under November 25. 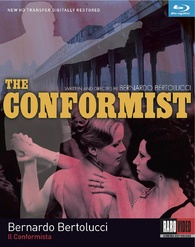