In an early announcement to retailers, RaroVideo is preparing 'Slaughter Hotel' for Blu-ray on December 9.

This Italian exploitation horror cult classic stars a terminally creepy doctor (Klaus Kinski) at an asylum for suicidal and disturbed women. There's a team of strange doctors, unprofessional nurses and even a hunky gardener at these ladies' service to help them recover. In classic Giallo form director Fernando Di Leo introduces a mad-raving murderer, typically dressed in black and using the institution's old-fashioned armory decoration as slashing tools. Margaret Lee and Rosalba Neri are among the frequently unclothed cast, and there are decapitations, crossbow bolts in the eye, and some fairly explicit sex. This gory slasher flick with more than its fair share of nudity is a Euro-grindhouse gem.

Specs have yet to be revealed, but supplements include: Lady Frankenstein's Memoirs (18 mins.), Asylum of Fear (15 mins.), Deleted Scenes (2 mins.), and a fully illustrated booklet with information about the film.

You can find the latest specs for 'Slaughter Hotel' linked from our Blu-ray Release Schedule, where it's indexed under December 9. 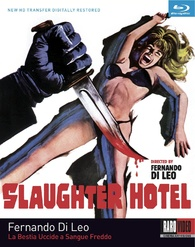