The music documentary series will hit the road on Blu-ray in April. You can pre-order the show here.

In an early announcement to retailers, RCA is preparing 'Foo Fighters: Sonic Highways' for Blu-ray on April 7.

In this new series, Foo Fighters commemorate their 20th anniversary by documenting the eight-city recording odyssey that produced their latest, and eighth, studio album. Foo Fighters founder Dave Grohl directs the series, which taps into the musical heritage and cultural fabric of eight cities: Chicago, Austin, Nashville, Los Angeles, Seattle, New Orleans, Washington D.C. and New York. The band based themselves at a legendary recording studio integral to the unique history and character of each location. One song was recorded in each city, and every track features local legends. Even the lyrics were developed in an experimental, unprecedented way: Grohl held off on writing them until the last day of each session, letting himself be inspired by the experiences, interviews and personalities that became part of the process. 'Foo Fighters Sonic Highways' is, in Grohl’s words, “a love letter to the history of American music.” Each episode delves into the identity of each city -- showing how each region shaped these musicians in their formative years and, in turn, how they impacted the cultural fabric of their hometowns. Every artist who appears in the show, regardless of genre or locale, started as an average kid with universal dreams of making music and making it big.

Specs have not been detailed yet, but supplements will include: 10 Extended interviews and More than 150 minutes of never before seen footage, inside the recording of Sonic Highways.

You can find the latest specs for 'Foo Fighters: Sonic Highways' linked from our Blu-ray Release Schedule, where it's indexed under April 7. 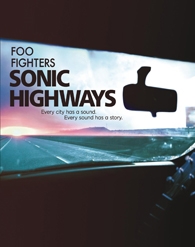