The final season of the acclaimed animated series is planned for Blu-ray in March.

In an early announcement to retailers, Nickelodeon and Paramount are preparing to release 'The Legend of Korra - Book Four: Balance' on Blu-ray on March 10.

To save the world, Avatar Korra (Janet Varney) endured her most intense battle yet. Now broken and bruised, Korra begins a journey of self-discovery and survival as the strong prey upon the weak. When an aggressive military force rises up led by the power hungry Kuvira (Zelda Williams), the fate of the Earth Kingdom hangs in the balance and only the Avatar and her friends and fellow warriors -- Mako (David Faustino), Bolin (P.J. Byrne), Asami (Seychelle Gabriel), Tenzin (J.K. Simmons), Lin Beifong (Mindy Sterling) and Jinora (Kiernan Shipka) -- can set things right.

The Blu-ray will feature 1080i video, lossless 5.1 audio, and supplements include Audio Commentaries (Standard and BD Exclusive Tracks), as well as Blu-ray exclusive The Legend of Puppetbender Presents "The Making of a Legend: The Untold Story - Part Il", and Legend of Korra New York Comic-Con Panel.

You can find the latest specs for 'The Legend of Korra - Book Four: Balance' linked from our Blu-ray Release Schedule, where it is indexed under March 10. 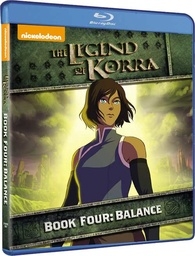