The sci-fi film starring Will Smith will use advanced projection technology.

Developed in partnership with Christie, Huaxia Film Distribution, and GDC Technology Limited, the CINITY Cinema System utilizes two Christie CP4450-RGB HFR projectors with laser optical technology. For the premiere of Gemini Man, the CINITY system will provide 3D projection in 4K resolution at 120fps for each eye with a brightness of up to 28-foot lamberts.

"We're proud to be presenting Ang Lee's incredible film to the premiere audience in 4K resolution, 3D, and at 120 frames a second (fps) using the CINITY system with Christie RealLaser technology – a bold specification that exceeds all DCI-compliant presentation systems," says Kyle Davies, President of Domestic Distribution for Paramount Pictures. "We are excited by this new technology and look forward to its rollout in theatres worldwide." 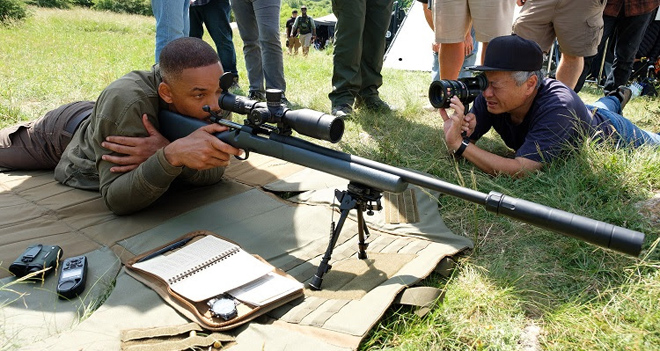 Unlike traditional Hollywood films, which are shot at a frame rate of 24fps, Gemini Man was shot at a High Frame Rate of 120fps. This technique is used to create a sense of "hyper-clarity and realism." Gemini Man is now the second 120fps HFR film directed by Ang Lee, following 2016's Billy Lynn's Long Halftime Walk.

Gemini Man will be available to watch in a variety of configurations via current theater projectors, including 2D 4K 24fps through 3D 2K 60fps, as well as 3D 2K 120fps for Dolby Cinema. And beyond the TCL Chinese Theatre premiere, the movie's 3D 4K 120fps version will also be screened at select locations in Asia.

"Since working with Ang Lee and having created an HFR preview shown at NAB and IBC in 2016, we have demonstrated to the world that Christie is the only projector manufacturer capable of showing 4K, 3D and 120 fps per eye on a giant cinema screen," says Brian Claypool, vice president, Product Management at Christie. "Our partnership with Huaxia Film to develop and promote premium format movies, has led us to helping to bring Ang Lee's vision to life with his latest film, and the results are simply spectacular. It is exciting to be leading the way in this field and helping to deliver exciting new experiences to audiences."