'Zoolander No. 2: The Magnum Edition' Dated and Detailed for Blu-ray

Ben Stiller's comedy sequel will pose for Blu-ray next month.

In an early announcement to retailers, Paramount will be releasing 'Zoolander No. 2: The Magnum Edition' on Blu-ray on May 24.

Derek and Hansel are modelling again when an opposing company attempts to take them out from the business.

The Blu-ray combo pack will feature 1080p video, a DTS:X soundtrack, and supplements include: The Zoolander Legacy; Go Big or Go Rome; Drake Sather: The Man Who Created Zoolander; and Youth Milk.

You can find the latest specs for 'Zoolander No. 2: The Magnum Edition' linked from our Blu-ray Release Schedule, where it's indexed under May 24. 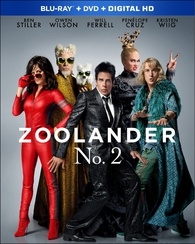